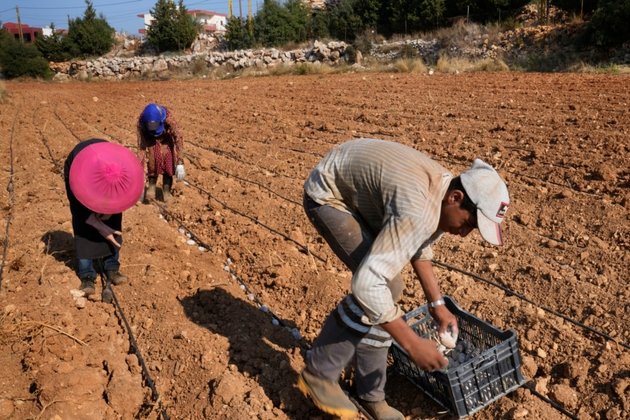 Farmers in a small town perched on a northern Lebanese mountain have long refused to accept defeat even as the government abandoned them to a life off the grid.

Harf Beit Hasna receives almost no basic services. No water or sewage system, no streetlight or garbage collection. The only public school is closed. The nearest pharmacy is a long drive down a winding mountain road.

'We live on another planet,' said Nazih Sabra, a local farmer. 'The state has completely forgotten us, and so have the politicians and municipalities.'

Its around 2,500 residents have gotten by because of an ingenious solution: They dug trenches, lined them with plastic and use them to collect rainwater. For decades, the rainwater enabled them to grow enough crops for themselves, with a surplus to sell.

But where government neglect didn't kill Harf Beit Hasna, the combination of climate change and economic disaster now threatens to.

In recent years, rainfall in Lebanon has decreased, straining even the most water-rich country in the Middle East. At the same time, the country's economy has fallen apart the past two and a half years; families whose livelihoods have been wrecked struggle to afford basics as prices spiral.

Harf Beit Hasna, on a remote mountain plateau above steep valleys, has taken pride in making it on its own with its rain-water pools. The town is dotted with them, most of them the size of a backyard swimming pool.

Sabra said he remembers in his childhood how his grandfather and other farmers could raise livestock and sustain a decent living.

But recent years have gotten harder. As rain declined and temperatures warmed, farmers adapted. They grew less of water-demanding produce like tomatoes and cucumbers and planted tobacco, a more drought-resistant plant.

Now they can barely grow enough to get by.

'If there isn't rain, you use whatever you have left stored and work with a deficit,' Sabra said. 'You can't even afford to farm anymore.'

Sabra's field is barren and dry, save some tobacco plants and potatoes. He tried to plant a small patch of tomatoes for his family's use. But to save water, he had to let them die. The rotting tomatoes swarm with pests.

'There's nothing we can do with them', Sabra said, before taking a long drag off his cigarette.

He has a small patch of eggplants surrounded by barren, cracking soil. He hopes he can sell them in the nearby city of Tripoli to buy more potable water for his family this month.

'Those eggplants wouldn't have been there without the ponds,' he says with a smile. His pool, which can hold around 200 cubic meters of water, was only about a quarter full. The water was green, because he's been drawing on it slowly, trying to ration out what's left.

From his field, Sabra can see the Mediterranean Sea on the horizon and, below him, a valley where there are freshwater springs. But gasoline is too expensive for him to drive daily to get water from there. He struggles to afford school for his children. His home hasn't had electricity for weeks because no power comes from the state network, and he can't afford fuel for his personal generator.

Government services and infrastructure across Lebanon are decrepit and faltering. But Harf Bait Hasna's situation is particularly bad.

It's remote and hard to reach. Administratively, it's caught between two different municipalities, neither of which wants to deal with it. And, residents say, it has no political patron - a crucial need for any community to get anything in Lebanon's factionalized politics. Sabra and other farmers say politicians for years have ignored their requests for a well or a connection to the state's water network.

The disaster in the town is 'much more profound (because) you have an entire community that is reliant on rain-fed agriculture' but can no longer rely on rain, he said.

Kayed, the co-founder and managing director of the Conservation Center's Environment Academy, is trying to find donors to fund a solar-powered well for the town and to draw officials' attention to get it connected to the state water network.

Across Lebanon, periods of rainfall have shrunk and the number of consecutive days of high temperatures have increased, said Vahakn Kabakian, the U.N. Development Program's Lebanon climate change adviser.

A recent report by the United Nations Food and Agriculture Organization said water scarcity, pollution, and inequitable water usage add to the difficulties of Lebanon's agricultural communities. The agriculture sector amounts only to a tiny fraction of the country's economy and so is often overlooked, and it like the rest of Lebanon's producers and consumers are struggling with skyrocketing costs.

In Lebanon's breadbasket in the eastern Bekaa Valley, farmers say their work is disrupted by strange weather patterns because of climate change.

'Rain has declined in its usual period, and we're seeing our soil dry up and crack. But then we somehow got more rain than usual in June,' Ibrahim Tarchichi, head of the Bekaa Farmers Association told the AP. 'We haven't seen anything like this before in the Bekaa.'

He doesn't expect anything from Lebanon's politicians. 'Here, you can only expect help from God.'

The government for years has pledged to diversify its economy and invest more in the ailing agriculture sector. But since the economy fell out, the divided ruling clique has hardly been able to formulate any policies, failing to pass a 2022 budget so far and resisting reforms demanded for an International Monetary Fund bailout.

In the meantime, Sabra takes some water from one of his ponds and sighs. He has almost run out of water from the last rainy season in the winter. This is his only lifeline to last until the rains come again.

'There is nothing left for us but the ponds,' he said.