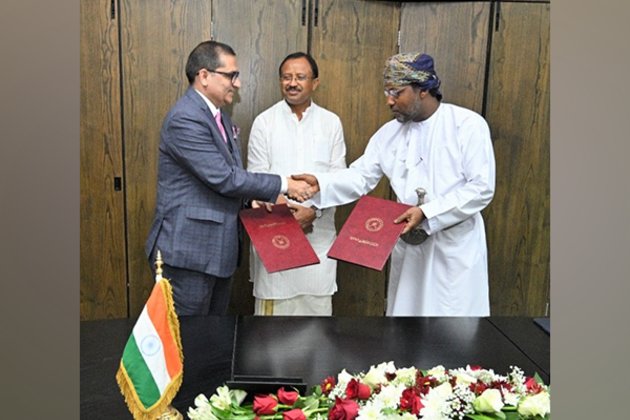 Muscat [Oman], October 4 (ANI): National Payments Corporation of India and Central Bank Of Oman on Tuesday signed a historic MoU to launch the Rupay debit card in Oman, paving the way for a new era of financial connectivity.

Minister of State for External Affairs V. Muraleedharan witnessed the signing of the MoU and met Tahir Al Amri, Executive President, Central Bank of Oman. MoS Muraleedharan arrived in the capital city of Oman, Muscat on Monday for a two-day visit to deepen ties between both nations.

Terming the MoU as a new milestone in bilateral relations, Minister of State for External Affairs V. Muraleedharan tweeted, "Happy to meet with H.E. Tahir Al Amri, Executive President, Central Bank of Omanwitness signing of the historic MOU between CBO and NPCI to launch the Rupay debit card in Oman, paving the way for a new era of financial connectivity."Muraleedharan earlier also visited Oman Investment Authority and met Executive President, Abdulsalam Al Murshidi. MoU apprised him of huge investment opportunities in the infrastructure and energy sectors in India and highlighted the policy initiatives being taken in India to spur growth.

During his visit, MoS also visited the beautiful and pristine Krishna Temple in Muscat, a true testimony to the deep people-people ties between India and Oman. He offered prayers for the abiding friendship between Indians and Omani people.

Visiting a labour camp in Muscat the MoU interacted with the workers and enquired about their welfare. "Assured them that the safety, security, and welfare conditions of Indian workers, working abroad are a priority for the government under the visionary leadership of PM Narendra Modi," MoU tweeted.

He also held a productive interaction with Sheikh Khalifa Alharthy, Under Secretary for Diplomatic Affairs on bilateral and regional issues of mutual interest.

Muraleedharan inaugurated a newly designed library with an aim to provide knowledge resources to the readers, at the Embassy of India in Oman on Monday.

As per the Embassy of India in Oman, there are about 624,000 Indians in Oman, of which about 4,83,901 are workers and professionals, as of May 2021. There are Indian families living in Oman for more than 150-200 years. Moreover, the two countries hold strong economic, commercial and cultural ties.

The Union Minister last visited Oman on 15-17 December 2020. Besides, there has been sustained and frequent exchange of high-level visits between both countries. In 2018, Prime Minister Narendra Modi also visited Oman, while External Affairs Minister S Jaishankar visited Oman in 2019.

India and Oman share warm and friendly relations underpinned by historical and cultural linkages and strong people-to-people ties. As per the MEA statement, the visit will provide an opportunity to comprehensively review the state of bilateral relations between India and Oman and to chart pathways to further deepen and strengthen them. (ANI)