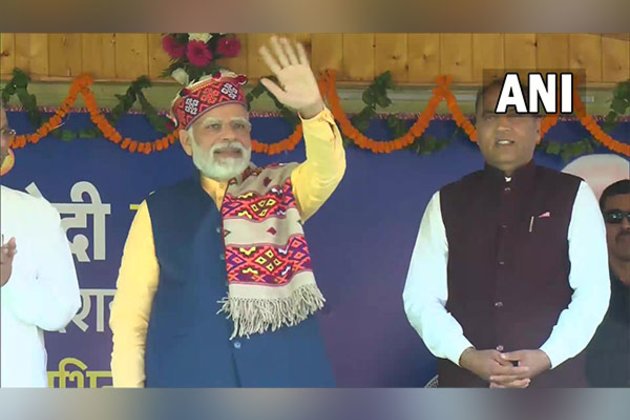 PM Modi was seen wearing a yellow kurta that he paired with a blue Nehru jacket. What caught the limelight was the Himachali cap and Kullu's printed traditional shawl.

This is the first time that PM Modi is participating in the Dusshera festival in Kullu.

Earlier in the day, Prime Minister Narendra Modi extended greetings to citizens on the occasion of Dussehra and expressed his happiness to be a part of the International Kullu Dussehra Festival that is to be celebrated here from October 5 to 11 at the Dhalpur Ground in Kullu.

The festival is unique in the sense that it is the congregation of more than 300 deities of the valley. On the first day of the Festival, obeisance is paid to the Deities in their well-decorated palanquins at the temple of the Chief Deity Bhagwan Raghunath Ji and then it proceeds to the Dhalpur Ground.

"I am elated to provide the citizens of Himachal Pradesh with the gifts of projects of education, health, and infrastructure worth thousands of crores," PM Modi said adding that he will seek the blessings for the country by joining the Raghunath Ji Yatra.

"I am very fortunate to participate in the Kullu festival after so many years," he added.

The Prime Minister will witness this divine Rath Yatra and the grand assembly of the Deities in the historic Kullu Dussehra celebrations.

"The development projects inaugurated today on the occasion of Vijayadashami will play an important role in achieving the vision of a developed India by following the 'Panch Pran'. Today, Bilaspur has got the double gift of education and medical facilities," PM Modi said.