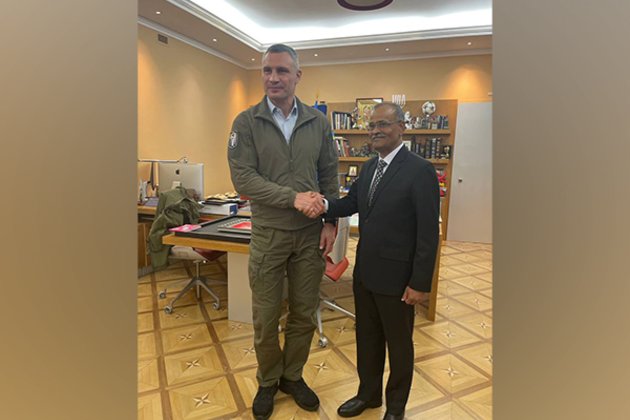 This meeting comes as Prime Minister Narendra Modi on Tuesday held a phone call with President Volodymyr Zelenskyy amid the Russia-Ukraine war that has claimed thousands of lives since it began in February this year.

"Ambassador Harsh Jain called on Mayor of Kyiv H.E. Mr Vitaliy Klitschko on October 4, 2022, and exchanged views on the current situation in Ukraine," the Indian embassy said in a tweet.

On Tuesday, Prime Minister Modi, in his telephonic conversation with Zelenskyy, expressed his firm conviction that there can be no military solution to the conflict and conveyed India's readiness to contribute to any peace efforts.

PM Modi once again called for the cessation of hostilities and the need to pursue the path of diplomacy, according to a press release issued by Prime Minister's Office (PMO).

The Prime Minister also reiterated the importance of respecting the UN Charter, International Law, and the sovereignty and territorial integrity of all states.

In his phone call with PM Modi, Zelensky discussed the issue of Russia's referenda "in the temporarily occupied Ukrainian territories, food and nuclear security, and invited him to visit Ukraine."Ukrinform News agency reported that Ukraine's President noted that "all the aggressor's decisions aimed at attempted illegal annexation of Ukrainian territories are null and void and do not change reality."Zelensky emphasized that under such conditions, Ukraine will not conduct any negotiations with the incumbent president of the Russian Federation, and recalled that Ukraine has always been committed to a peaceful settlement through dialogue.

Since the start of the conflict, India has advocated a path of dialogue and diplomacy. It has also repeatedly called for an immediate cessation of violence. Notably, PM Modi's recent remarks that "today's era isn't of war" was hailed by leaders around the world.

On September 30, India's Permanent Representative to the UN, Ruchira Kamboj, said India is deeply disturbed by the recent turn of developments in Ukraine and stressed that dialogue is the only answer to settle differences.

Kamboj urged that all efforts are made by the concerned sides for the immediate cessation of violence and said that dialogue is the only answer to settling differences and disputes.

"Dialogue is the only answer to settling differences and disputes, however daunting that may appear at this moment. The path to peace requires us to keep all channels of diplomacy open," she said during the address at UNSC. (ANI)